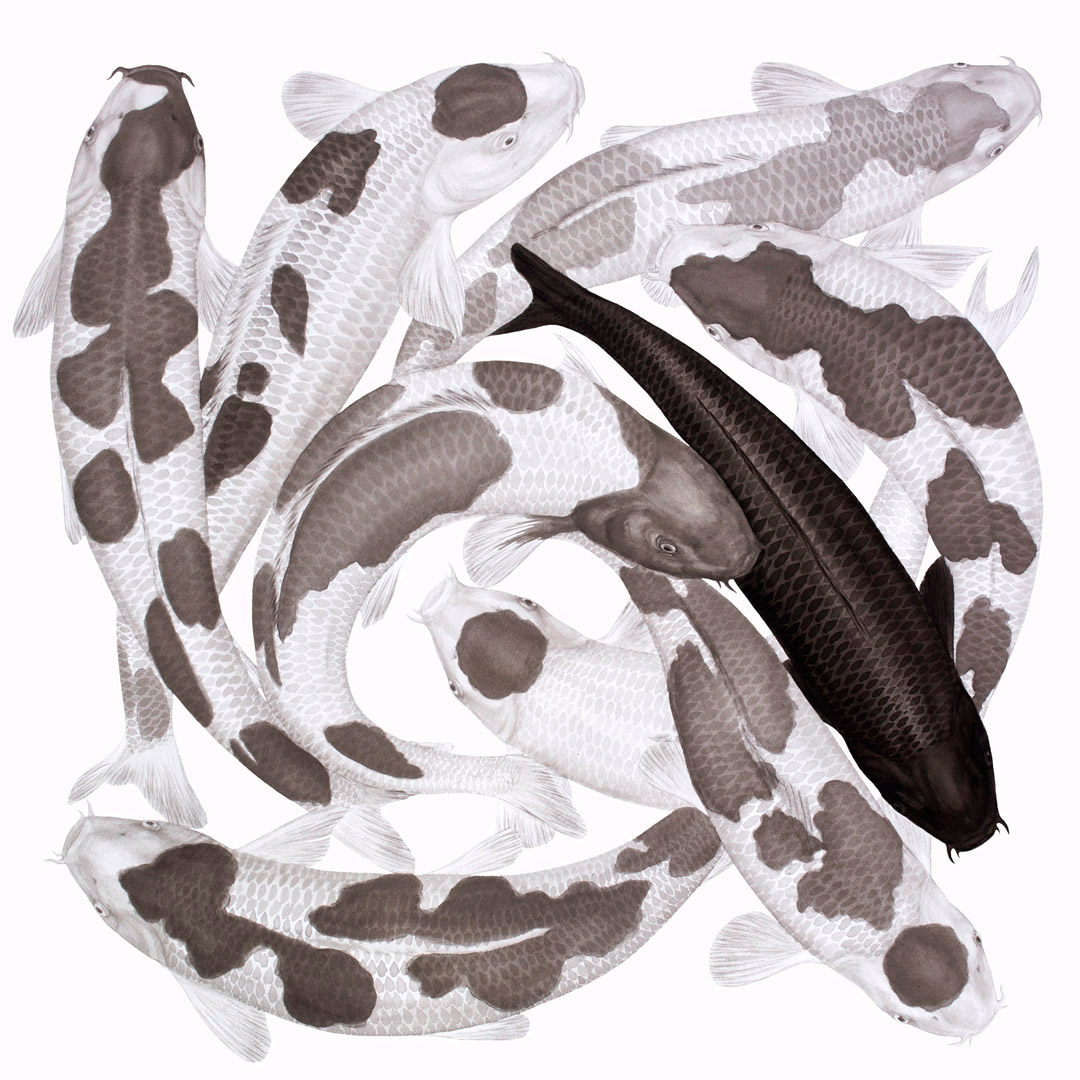 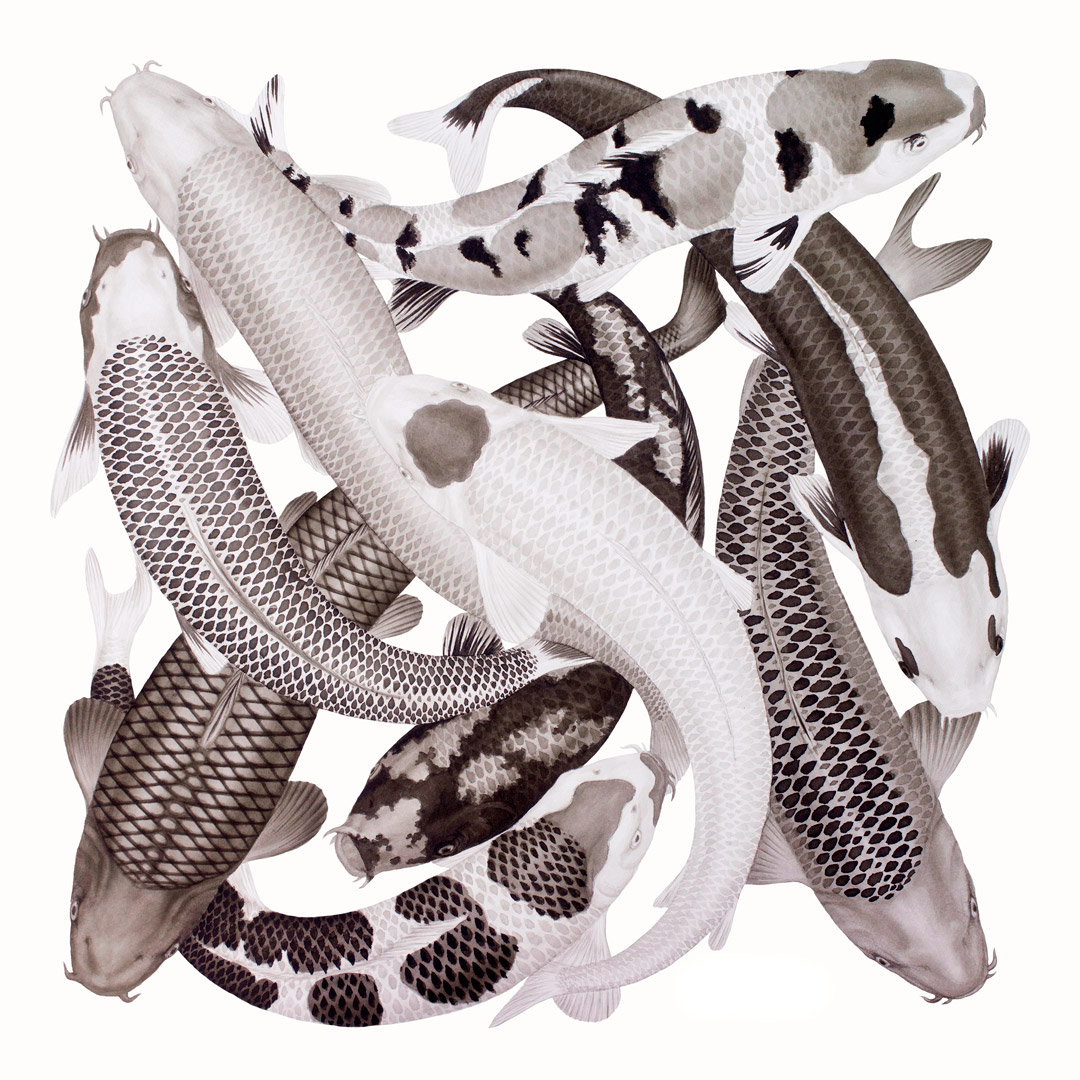 Koi are fancy breeds of Japanese carp. Interestingly most of the colourful varieties have been created in the 20th century only, but we are very familiar with the koi iconography featured in old prints and in traditional tattoos and ink paintings, in Chinese as well as Japanese culture. I was drawn to them as a subject for a variety of reasons. Koi have a rich mythological history, and enjoy cult status as highly prized animals. In general they are considered ‘lucky’. Judged in popular contests on various criteria including the ‘artistic value’ of their pattern, champion koi can be traded for hundreds of millions of Yen.

As an animal symbol the koi carp stands for courage, perseverance and a strong character attaining high goals – presumably because the fish swim upstream to breed, overcoming various obstacles including waterfalls. This is probably where their popularity as tattoo subjects comes from. In feng shui Koi are used to bring prosperity and attract money, either on paintings or in ponds and aquariums. Often they are used in a number of nine, sometimes with one black Koi to ward off evil. Koi ponds are also said to promote serenity, peace of mind and introspection.

Besides all the interesting folklore and various legends around koi, the coloured koi are incredibly beautiful ‘man-made’ animals. All the colours I added for the prints are from actual koi breeds, which is astonishing considering that the original koi is the chagoi, meaning ‘tea-coloured’.

In the two drawings I used the feng shui number of nine koi and placed them into a rather condensed square space, also highlighting a duality in the ‘attracting prosperity’ element of their mythology. Many of us spend our lives crammed into small spaces somewhere in a city, chasing an elusive ‘prosperity’. We are made to believe that we do this out of our own free will. Furthermore the perception of our material needs is fluid and dictated by outside pressures to consume and conform, and sometimes we overlook the boundaries between necessity, pleasure, vacuity and greed. This may deprive us of some of the other valuable koi associations: serenity, introspection and peace of mind, and having the courage and perseverance to attain noble goals.

Koi are now very popular in many countries all over the world and new varieties keep being bred, including fish with metallic or glittering scales, not all of which are approved of by the traditionalists. If you look up ‘koi varieties’ you can discover all the koi featured in the paintings, plus many more. 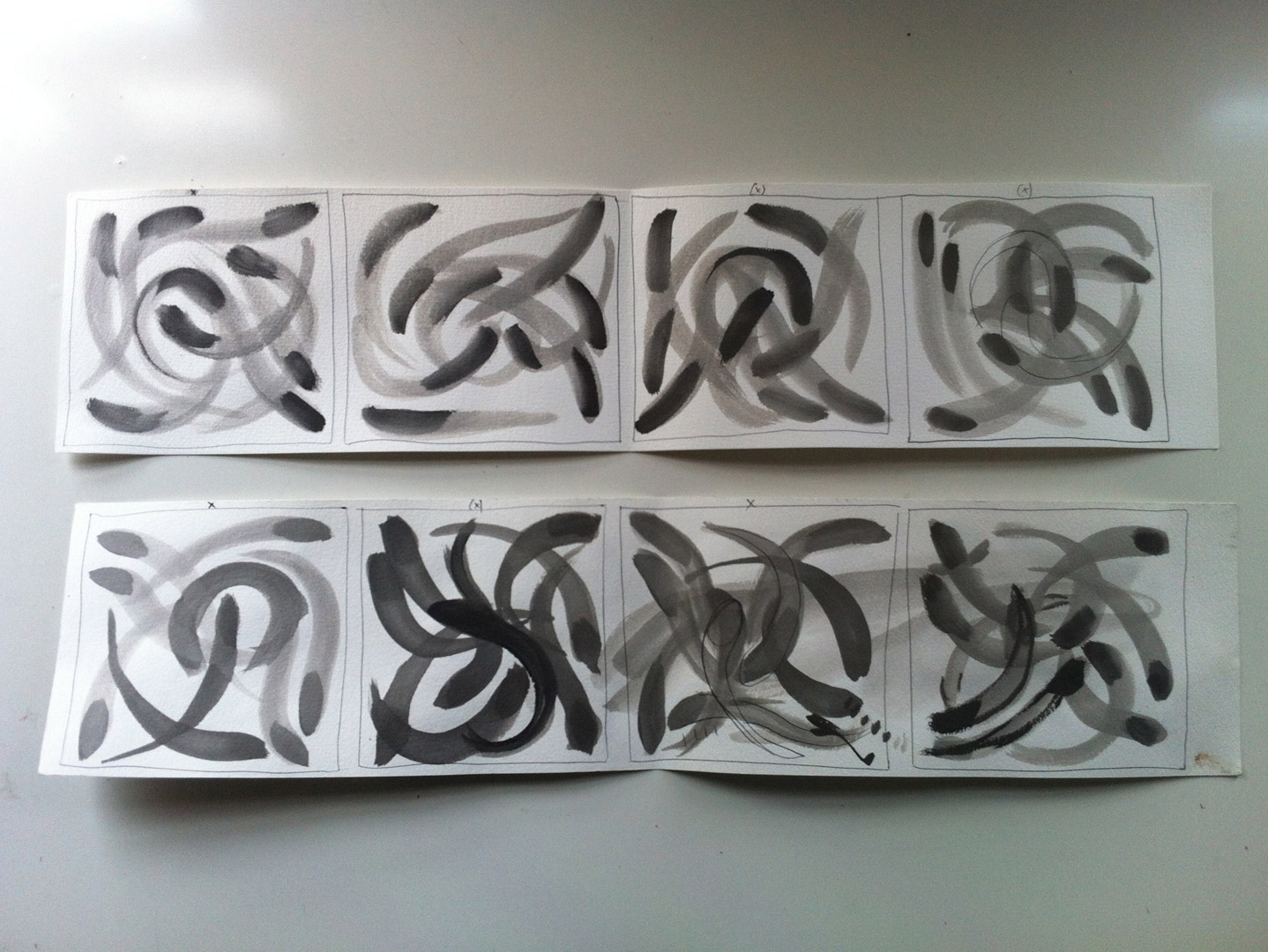 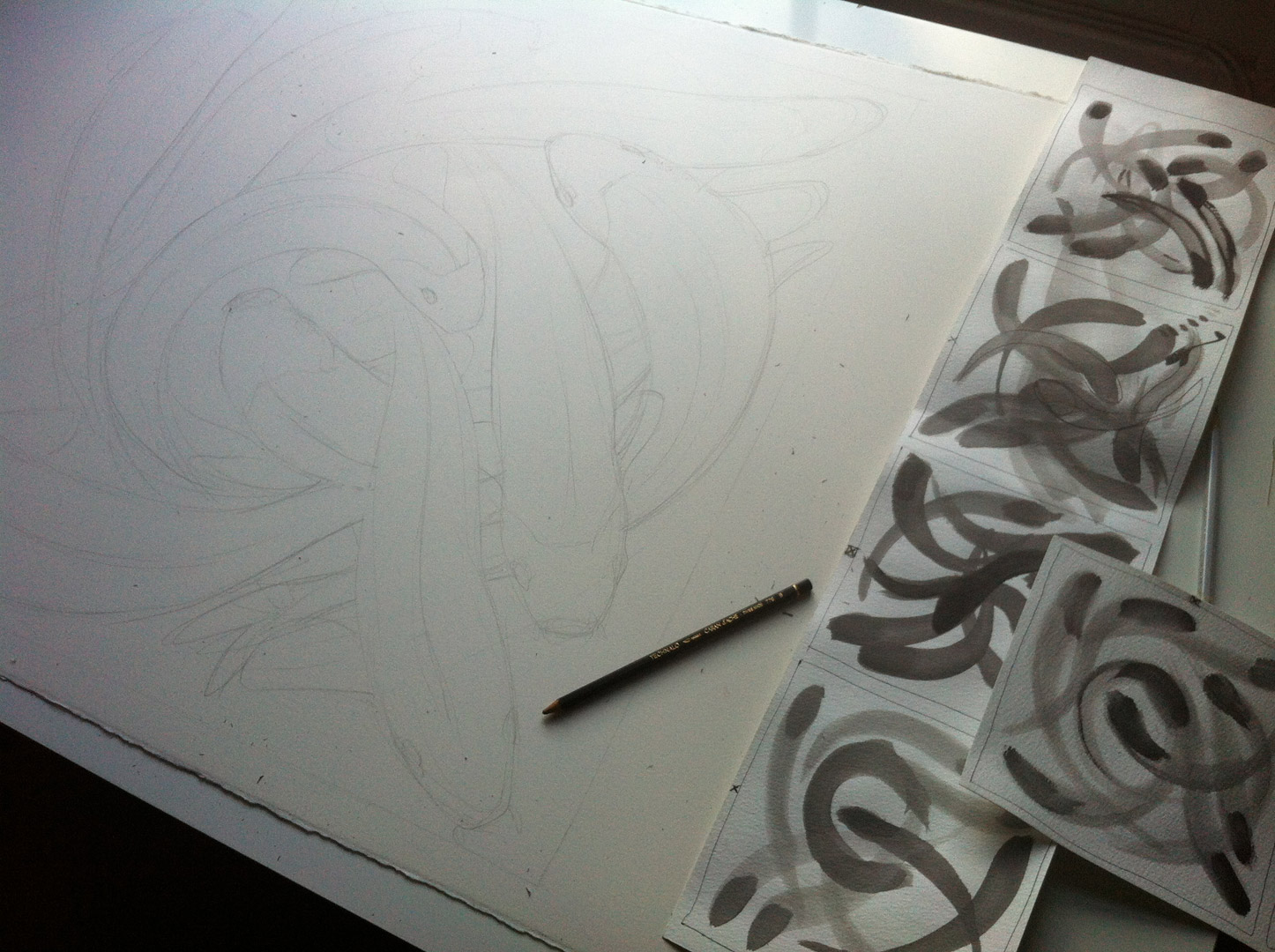 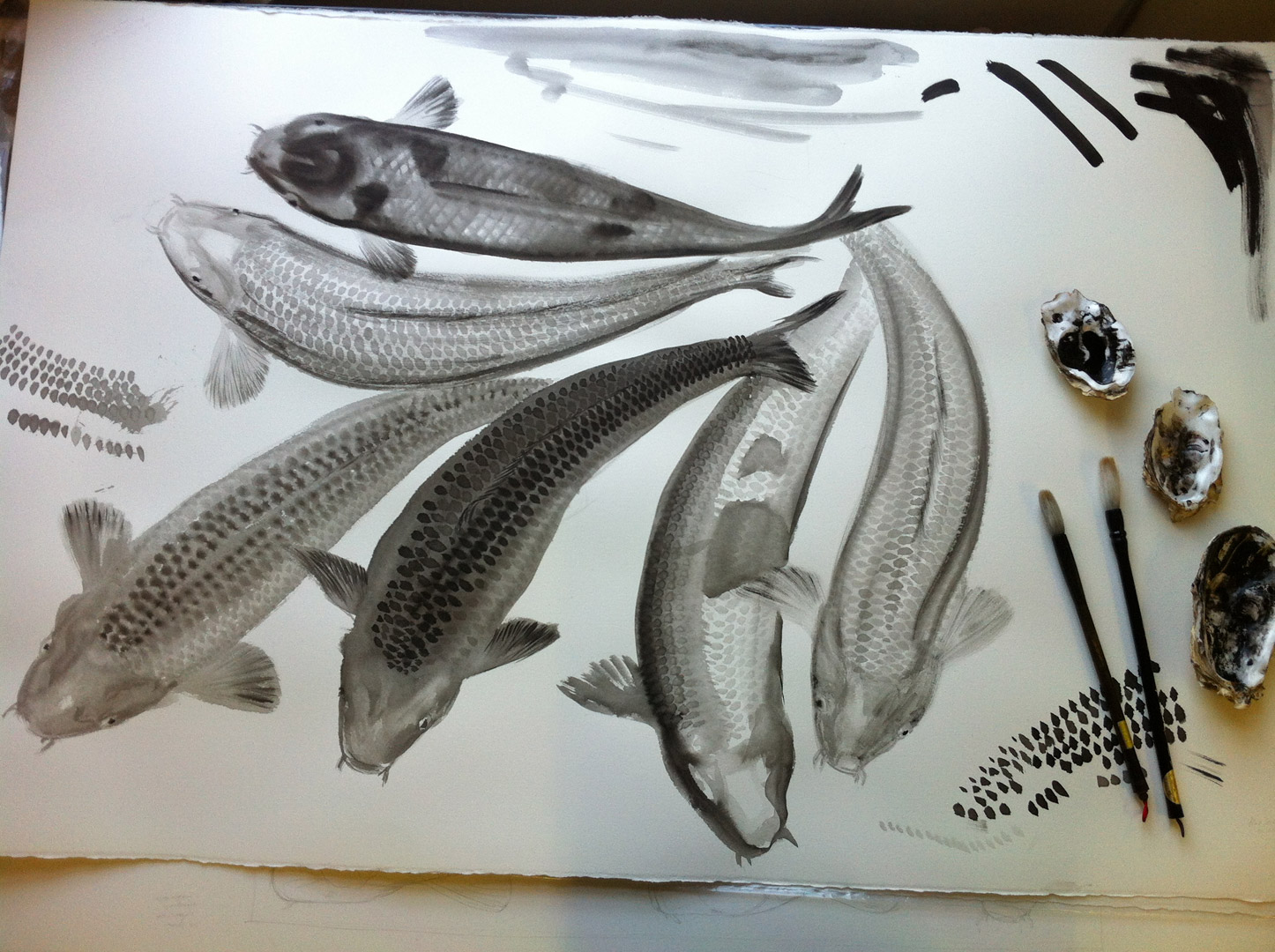 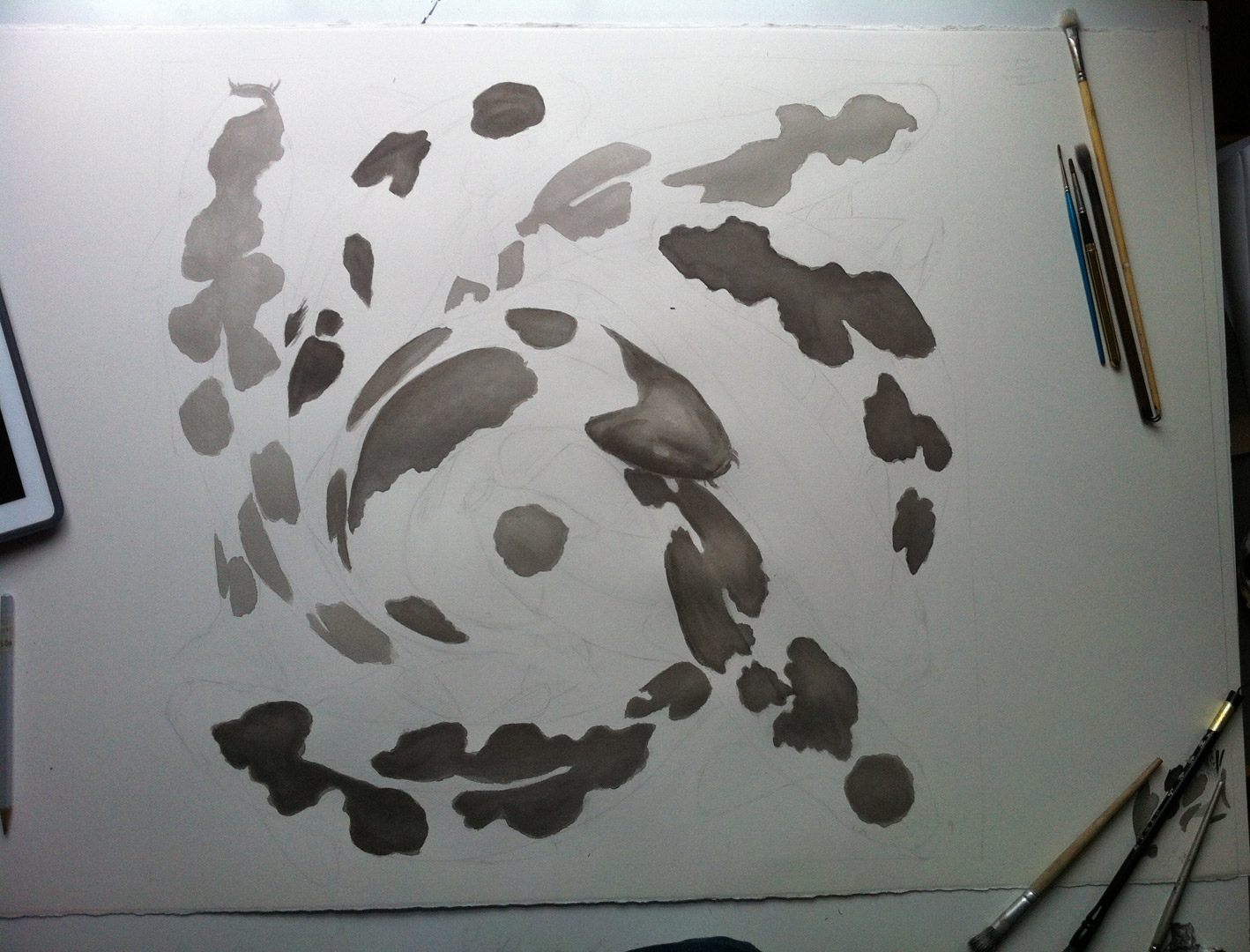 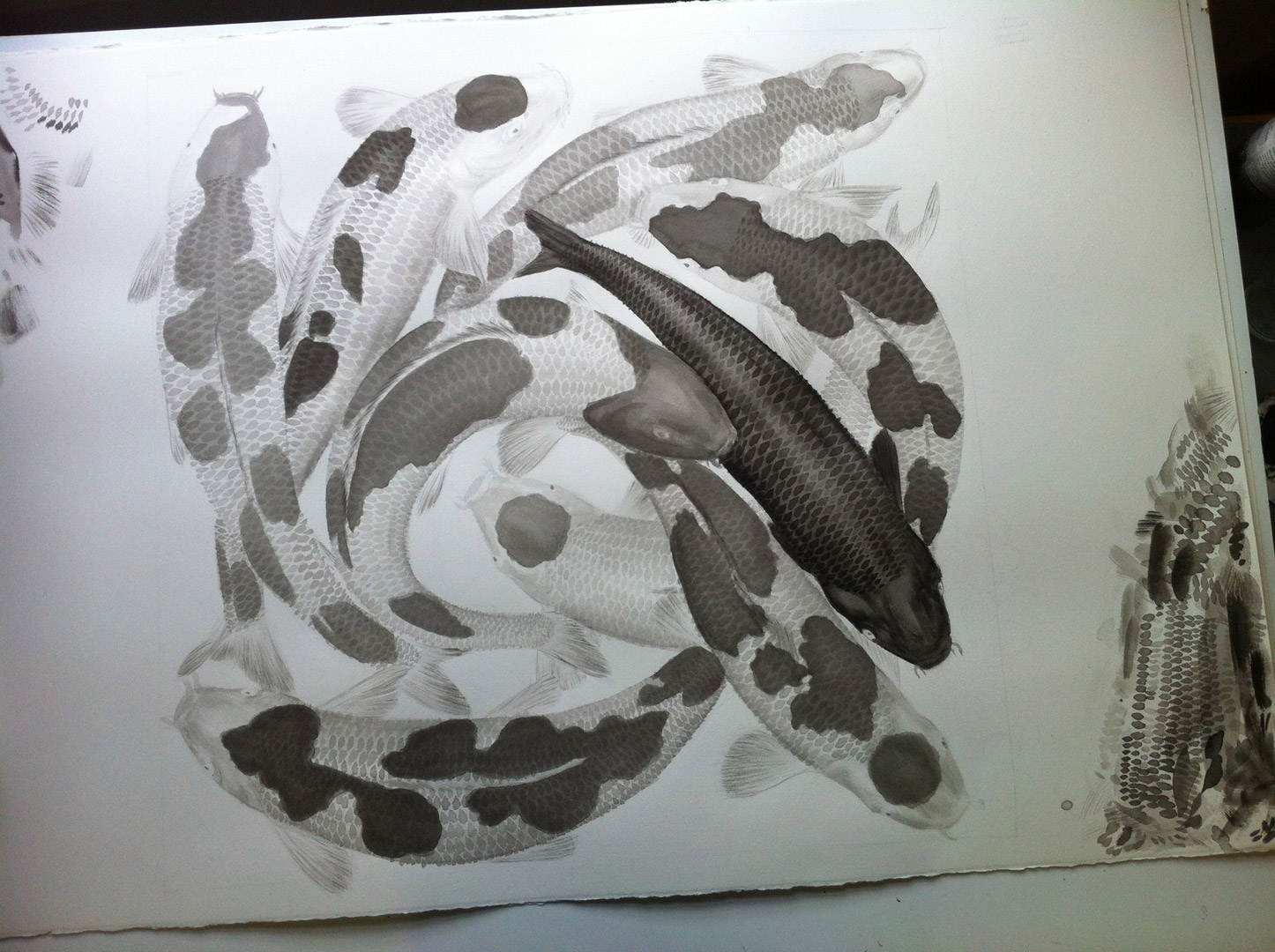 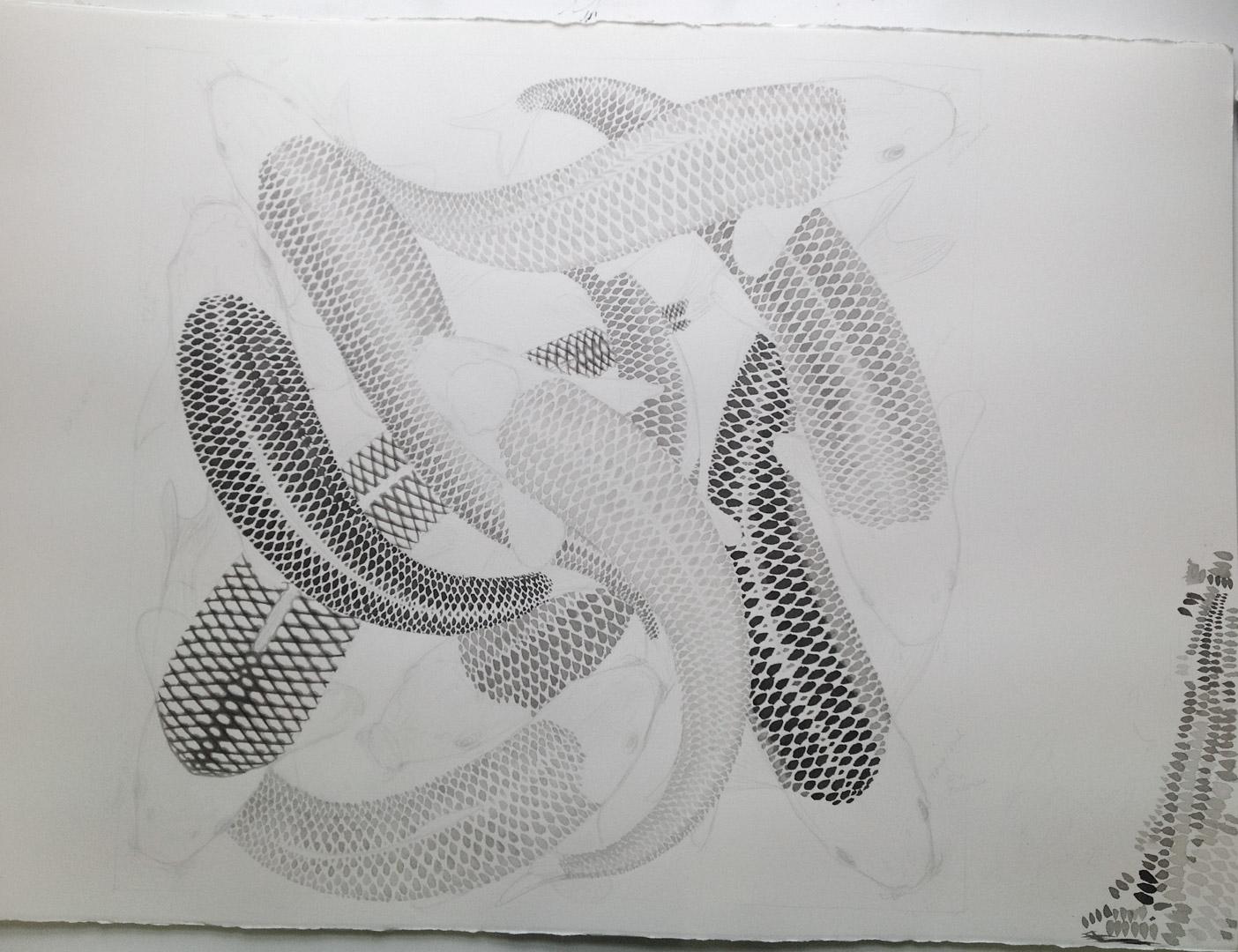 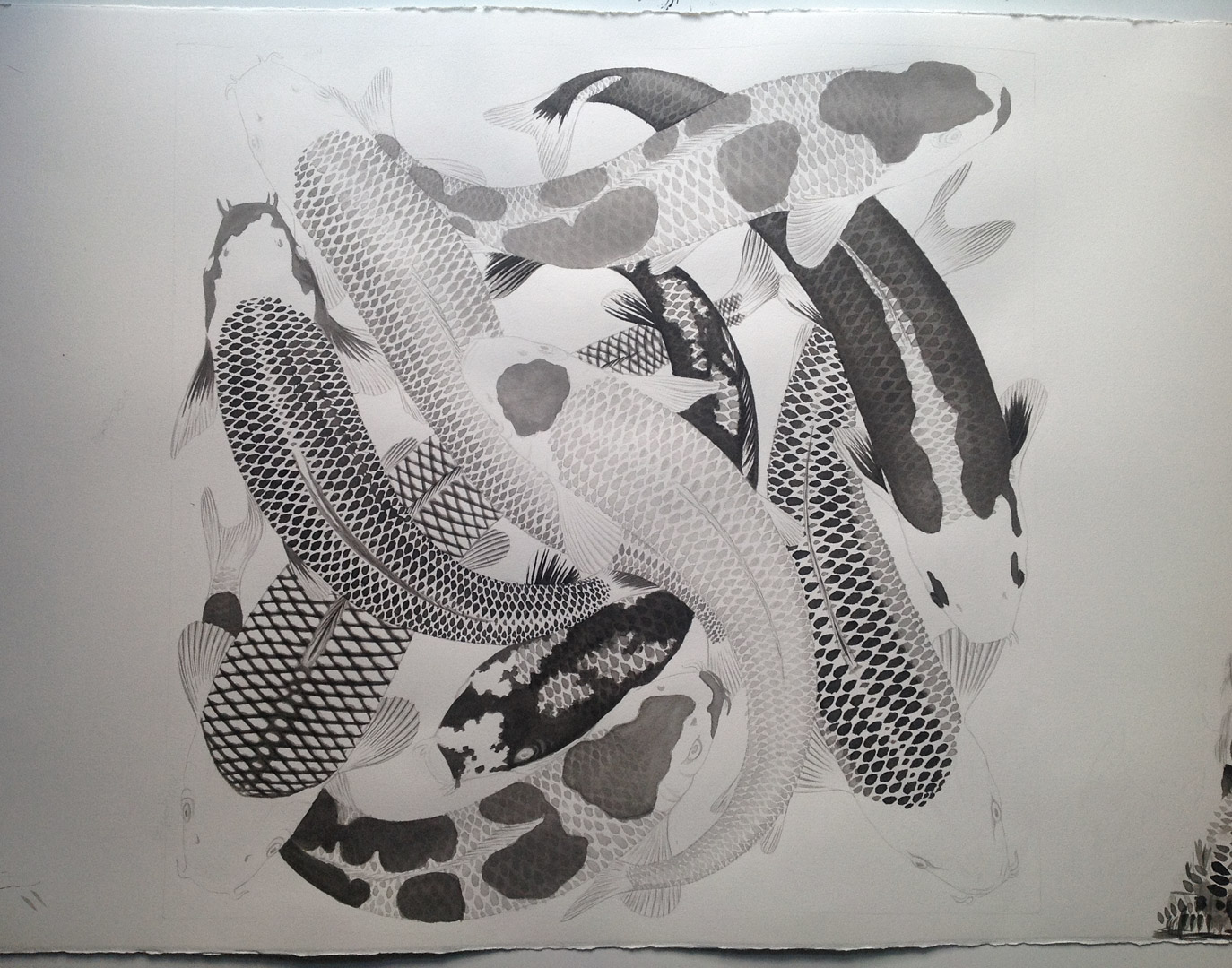 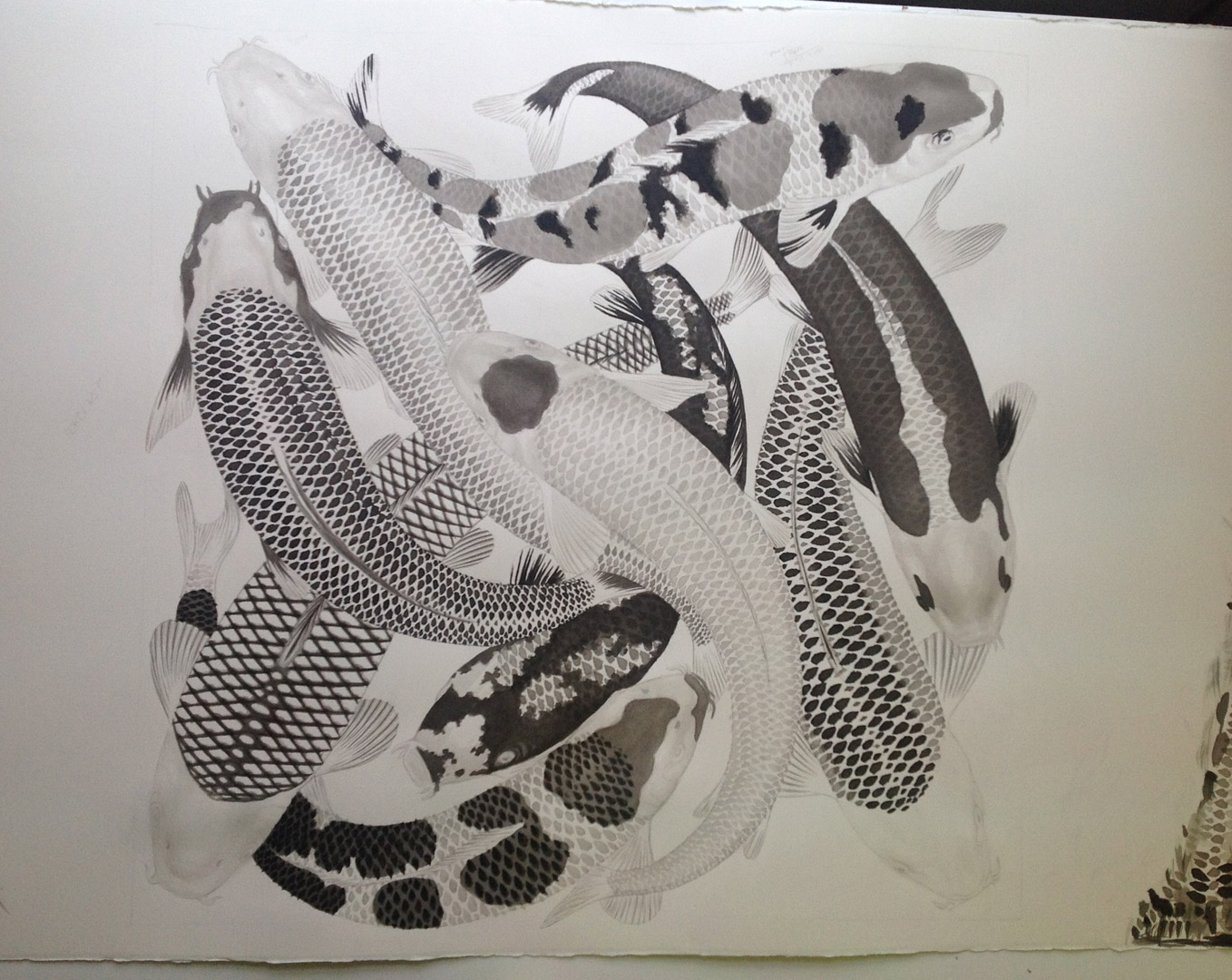 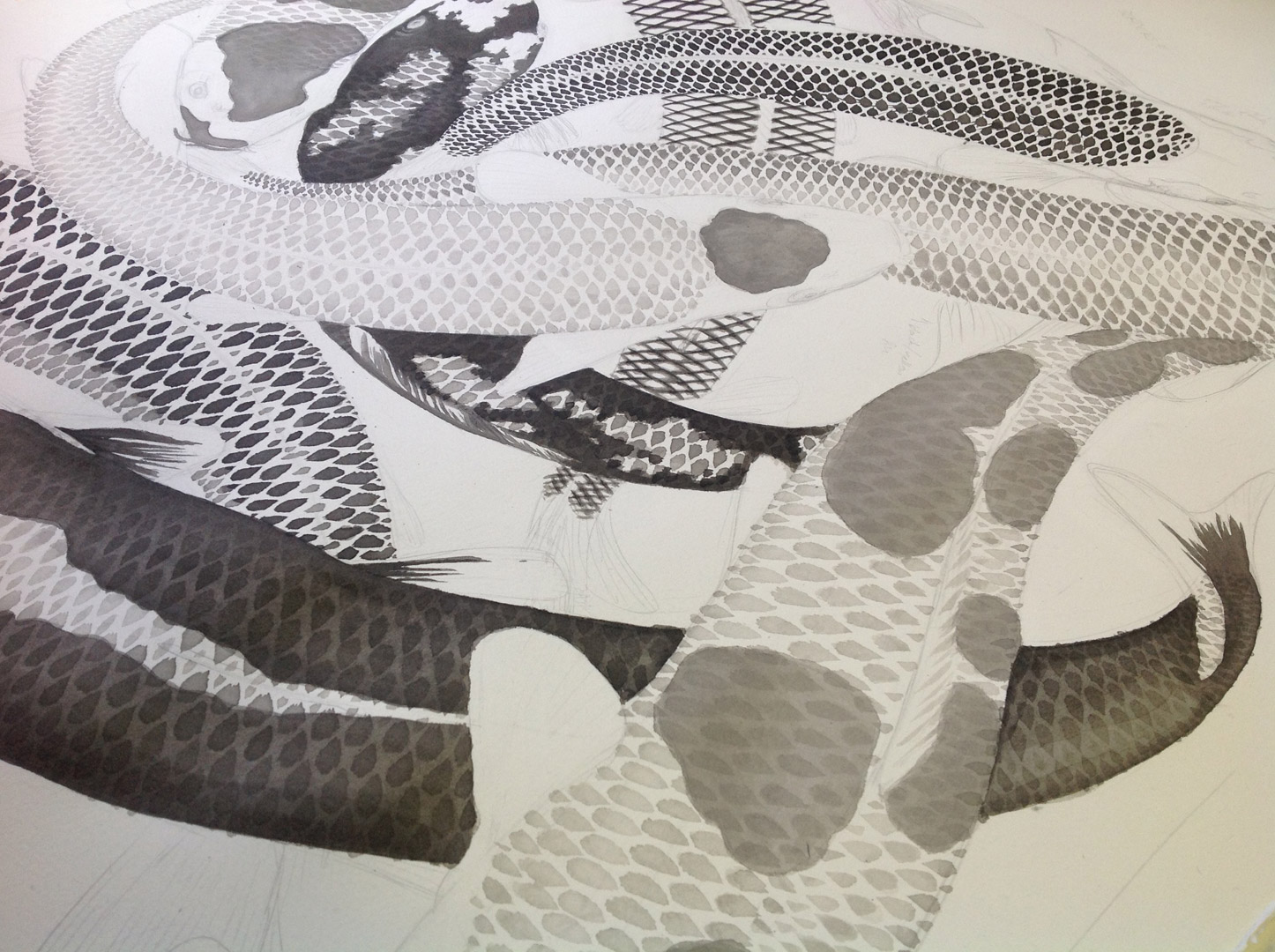 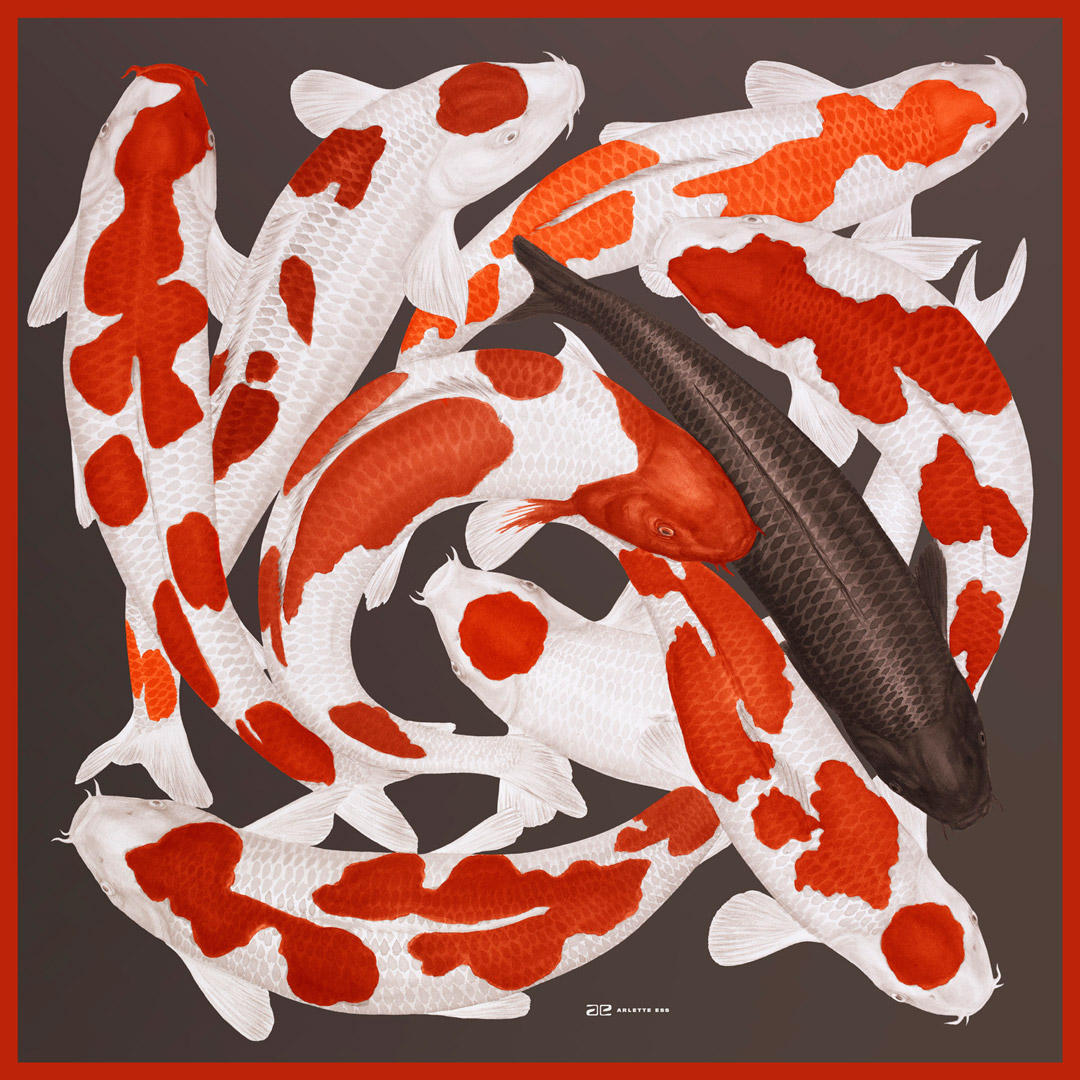 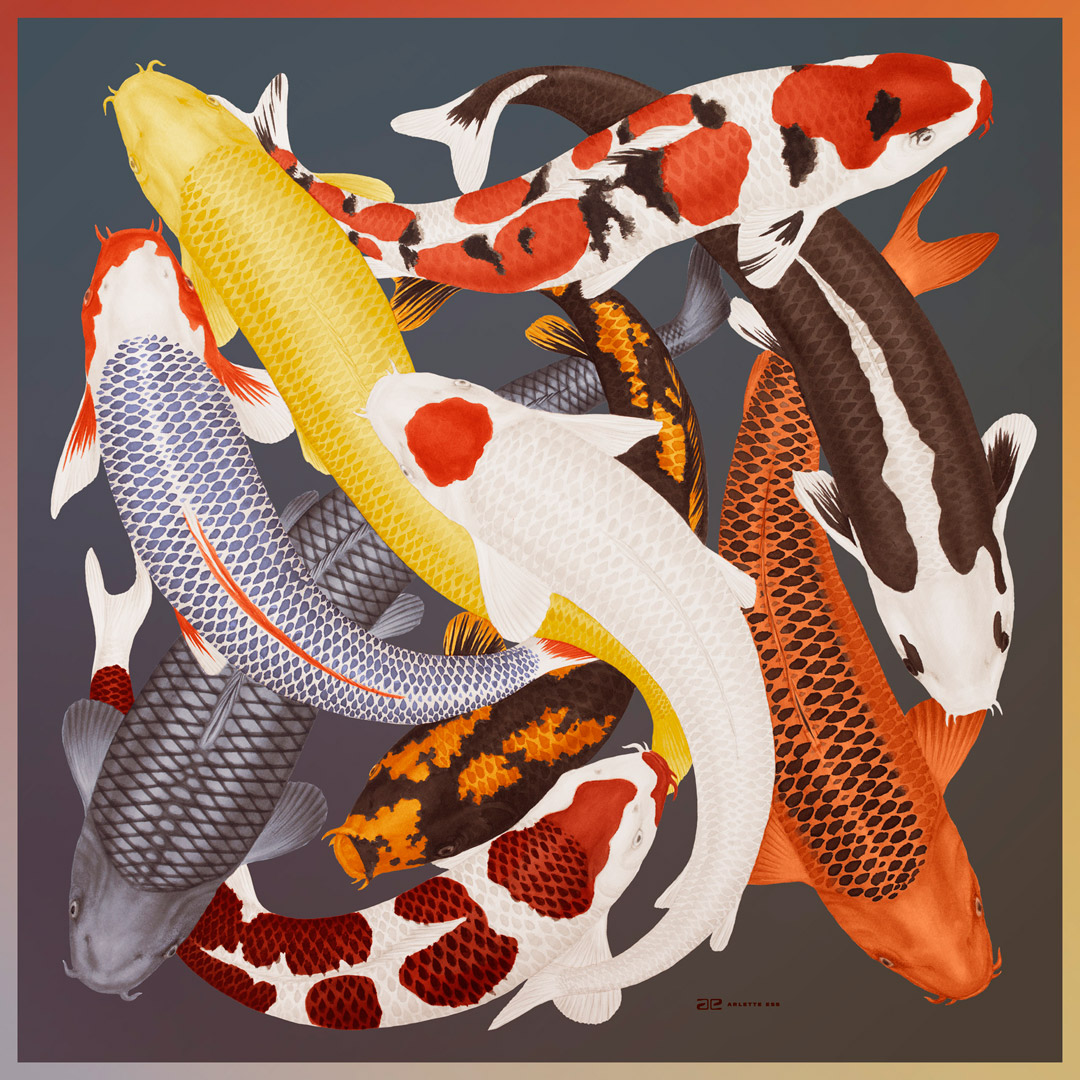 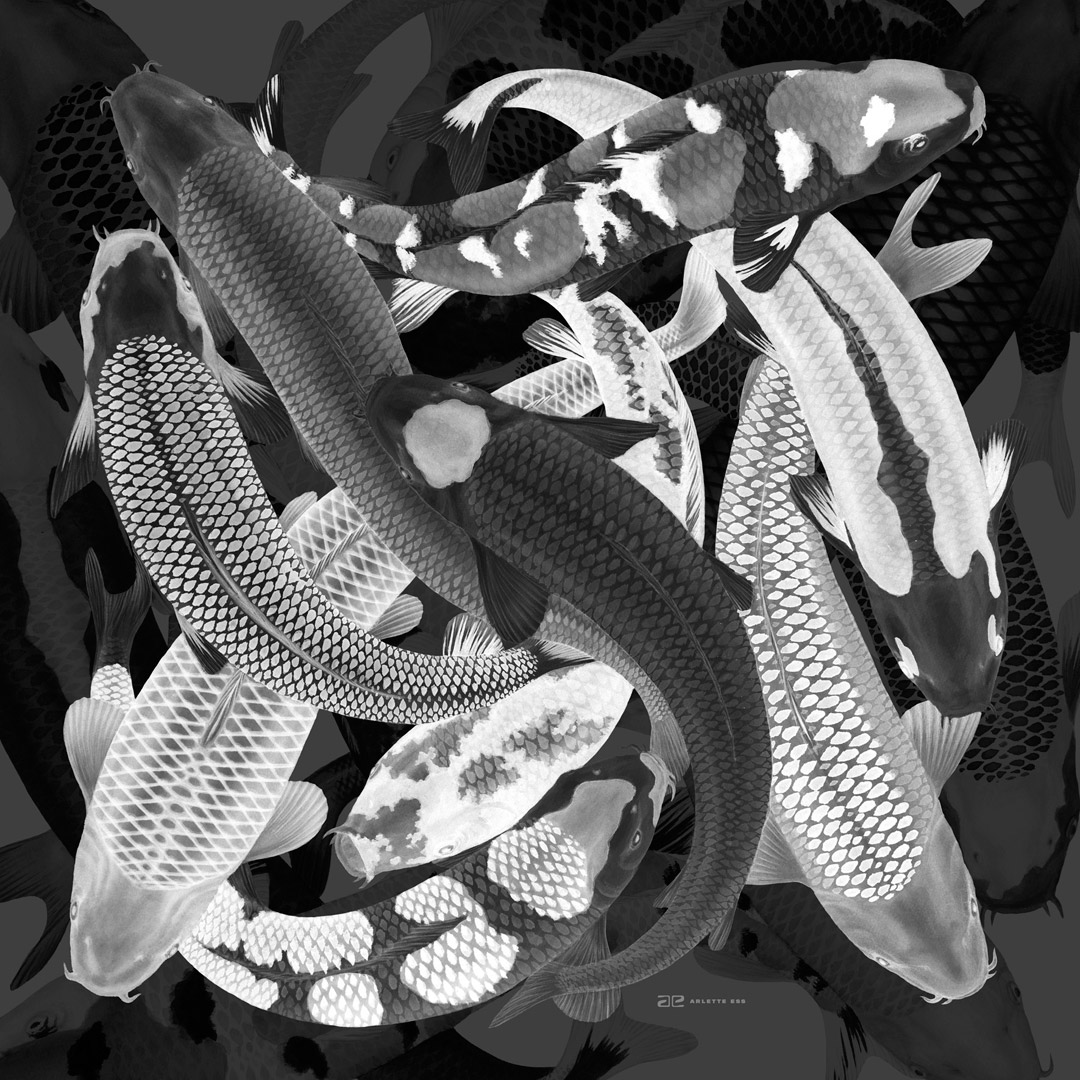 This is some of the work in progress. I used mainly calligraphy brushes to paint. They are not technically the right tools for drawing, because you don’t have so much control – the hair on the brush is long and soft and it’s all about the movement of the whole hand and arm. If you look at the fish scales, you can tell i applied the rows in one go, they are just ink dots made with the calligraphy brush. To draw like this requires the right frame of mind, otherwise you can’t get the rhythm and regularity. It’s a mix between concentration and relaxation, or what some call ‘a state of flow’. There is of course a risk to get it all wrong, but the result can look much more beautiful and coherent than if I tried to precisely place every scale in its ‘right’ place.

I like to use simple black ink as a medium, afterwards I added colour digitally to create another version of the work and make it into a scarf print.